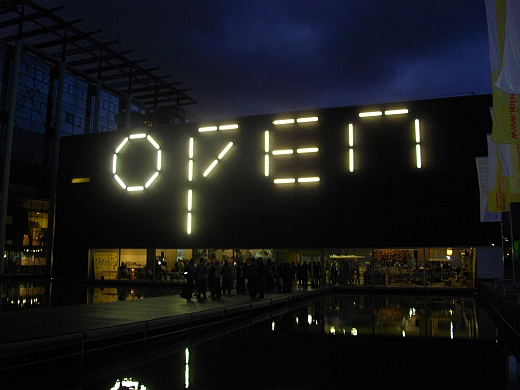 Yesterday the 4th edition of the IABR opened it’s doors for the public. The theme of the 2009 edition Open City: Designing Coexistence raises the question of social cohesion in and access to the city in relation to the contributions architects and urbanists can make for improving the quality of the urban condition. The curator of the exibition is Kees Christiaanse. The main exibition will take place at the NAi in Rotterdam until january 10 2010.

One of the highlights of the exibition, at least in terms of relevance for this blog, is the Maakbaarheid (makeability) exibition sub curated  by Crimson Architectural Historians. As part of the exibition Crimson, together with numerous local and international partners, reveals the persistent belief in the makeability of urban society that has infomed urban policies and projects throughout the Netherlands for more than half a century. ‘Facts on the Ground’ is a case study of the post war urban landscape of Rotterdam in which the large scale social engineering projects from the 1950s onwards, form the inspiration for nine bottum-up design proposals for existing locations in Rotterdam. Other parts of the exibition are the ‘Make No Big Plans’ Manifesto, which argues that the time is not yet right for the Big Solution, but rather argues for architectural interventions on a scale that still allows for perspective, and the film ‘Story of an Open City’ which shows, how time has left its mark on the city’s structure.

Anyway, there’s plenty of stuff going on at the IABR the coming months. Check the exibition calendar for detailed information. The event program will focus on Maakbaarheid from 21 to 25 October.